A video of a two hours performance of a man being swallowed by the waves gave birth to a poem, which after changed the manner that the video was cut and showed, a voice-over narrates the poem in its original language, a translation to english was made and 40 times handwritten into a white sheet of paper. “Praia” is a chain processes of production, of a repetitive coming and going between Gabriel and Gian. A repetitive gesture of re-signifying the matter 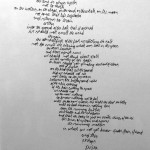 we should not think about sisyphus
not to see
the coming and going
the mantle that waits and despairs the hero
we should not see the time
that scratches the sun line
nor the circles
the time in abyss cycles
not to think
on the waters, on the algae, on the sand, on the whale, on the moon
not to see that life explodes
and returns to drain
within
into the ground of the hole that it opened
we should not smell the wind
the rain
the shellfish of the fish scratching the salt
not to smell the evening which was lost in the years
the other beaches
and their infinite suns
we should not think about death
on the vanity of the gods
on their stupid job of making dust out of stones
out of bones
on the bird that cut the board
that we should not see
nor listen to its scream
between the background noise
of the skin searing
of the hair cutting the space
we should not
up to now nothing
to know nothing nor to feel
until the wave crosses the thigh the chest the belly
until the head becomes nothing less
than the running bubbles
the brights and the shadows
and that the body be just an erratic shiver of the ice
its lines of sperm and spume
its running matter
in which we not yet know if water, if air, if sand
and then
perhaps
the sea